We would break these services down if they got too big to handle. Behind the scenes the services would talk to a single database. When it came to creating an application or system, these front end applications would invoke various services, which in turn invoked other services. This layered style of architecture worked for a while, so everything appeared to be fine.

Over time I began to question the benefit of this style.

It turns out this is actually quite a common style to SOA. But there are some serious flaws with this layered approach.

A solution to solve these problems is to partition the domain boundaries, vertically. The overall architecture would look like this: 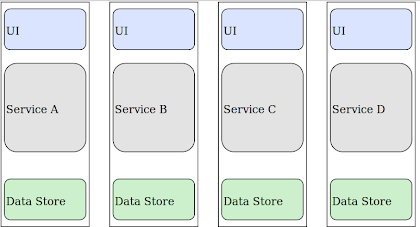 There is more to this introduction. Microservices are a hot new topic. Being defined as "SOA done correctly". Using the second example, within each domain there could be multiple services (or autonomous components) that coexist. The likes of UI composition to enable applications to be created from services is another great benefit. This enables so called "mashups".

I'll expand on these topics over time, but I am certain this method of vertically slicing services based upon business capabilities will be my default approach going forward.